Flash is an electronic bike company from Seattle who assembles their new, innovative “Flash” in the Bay Area of California. Their mission, according to their website (www.flashbike.io), is to create an electric bike for riders who want some assistance for commuting that may be a bit too far, for those who have suffered injuries, riders who have a lot of hills in the way, and city-dwellers who can put this eBike to good use.

Flash acknowledged the barriers riders face and what they are concerned with — namely theft and safety — and Flash wants to “tackle these barriers by building a bike that c[an] go farther and faster, while protecting the rider from accidents and the bike from would-be thieves.”

As for pricing their new eBike design, Flash knew they could not make the price as high as many electric bikes out there which can retail for $6K. So, Flash has put up an Indiegogo campaign (the details of which, you can find under the correct subheading below) to collect the money in order to create their new eBike and make it as affordable as possible.

The electric bike by Flash does not appear to have a solid name besides the Flash eBike, so we’ll continue to call it that. 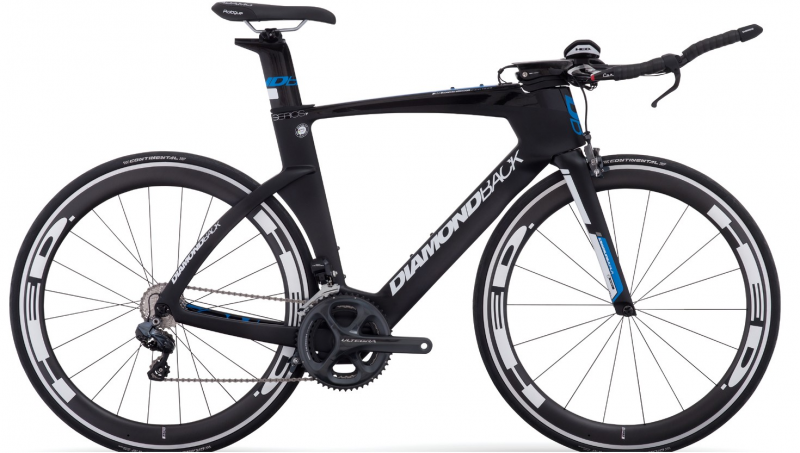 Available in three basic but appealing colors, you can get the Flash in:

Flash is currently offered as a single one-size-fits-most frame. Rather than being able to offer different sizes, they decided to create a bike frame that would fit the suggested heights of 5’3” to 6’2”, which is a large part of the cycling community.

The design of the bike includes an angled down tube, so it is easier for shorter riders and those with physical limitations or injuries to get on and off the bike.

If you want to add accessories to your bike, Flash has a list of compatible accessories such as fenders, front mounted baskets, rear mounted racks, bottle holders, etc… at the following link: https://support.flashbike.io/hc/en-us/articles/115005176828-Can-I-add-accessories-like-racks-fenders-etc-

In order to charge the Flash, you plug in the charging cable (which is included in your purchase) into the small charging port that is located on the frame (on the underside of the down tube).

Charging takes 4 to 5 hours from fully depleted to fully charged. However, Flash’s battery doesn’t have “charge memory,” so you don’t have to worry about having to wait until the battery is fully charged or depleted before riding/charging it. 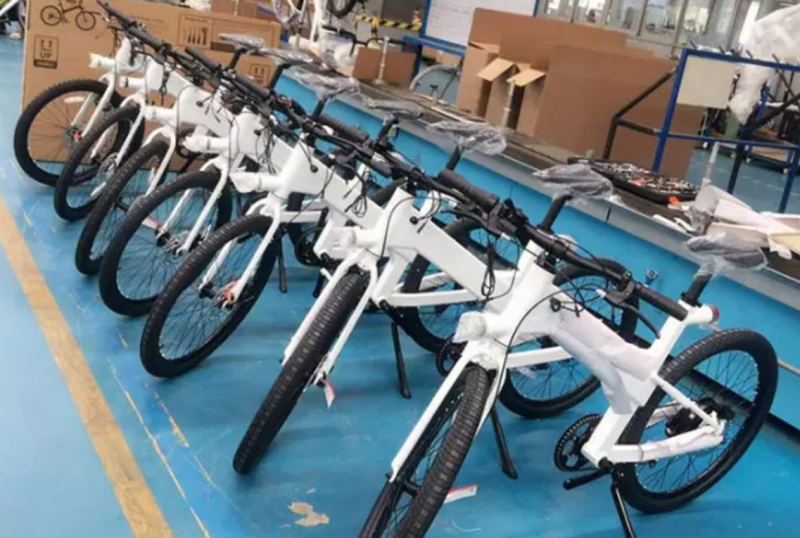 With 500 watts of power and a range of 50 miles between charges, Flash’s electric motor will give riders the freedom to go farther than manual pedaling.

The Pedal Assist and Throttle can be set and the bike will apply power as you pedal — twist the throttle on the right grip of the handlebar for a burst of speed. With a top speed of 28 miles per hour (mph), you can get there faster, even up hills. 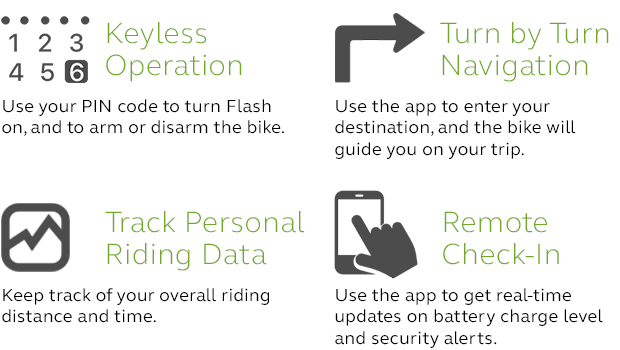 With intelligent and advanced safety features, the Flash has great lighting and security features that will impress you and keep you safe. For one, the high intensity LEDs are located up front via an adjustable headlight with a beam distance of 430 feet. The rear features an automatic brake light and both are built into the frame.

The front and rear also have always-on 360 degree running lights that ensure you are visible in traffic, any time of day or night.

The turn signals are easy to use and the signal buttons are located on the left grip of the handlebar.

What’s a roadworthy bike without a horn? Especially in a city? The Flash has an 85 decibel electric horn you can use to grab someone’s attention to avoid an accident.

Security is a huge deal, especially in urban areas where you have to lock your bike up in public, and especially with a piece of high tech gear like the Flash. There are three layers of security offered to riders for ensure safety of your bike. 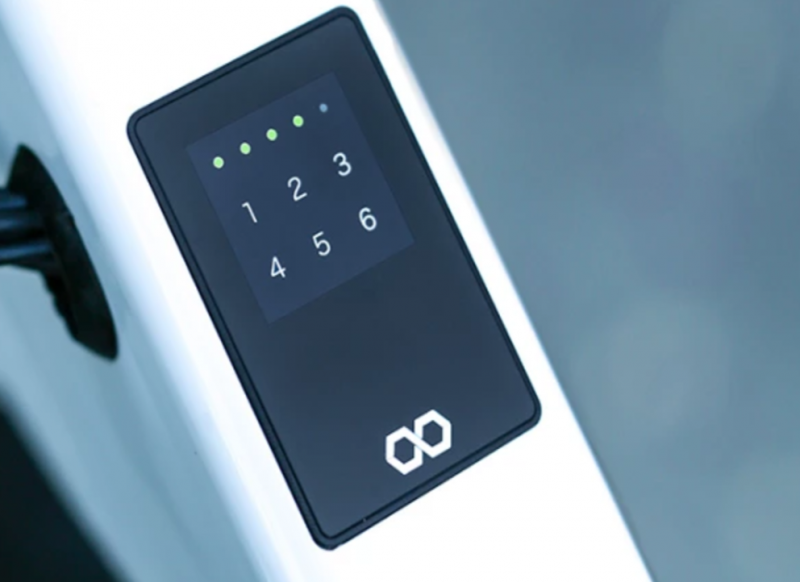 The Movement-Sensitive Alarm is one of them. If your bike is bumped, the touchscreen displays a warning message. If someone tries to steal the Flash, they will get hit with an 85 decibel alarm with flashing lights.

Any time the armed system registers an alert, you will immediately receive an Alert Notification via push notifications on your cell.

Finally, in case of theft, there is GPS tracking built-in to help locate your bike. 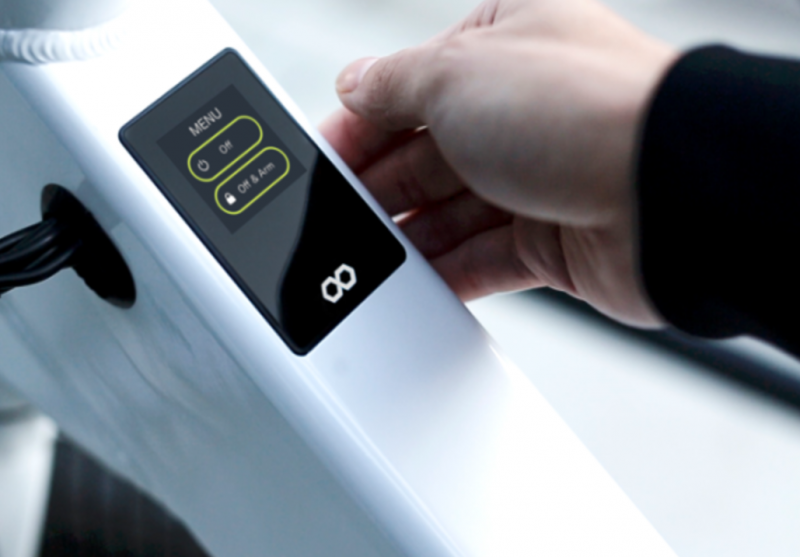 This isn’t your parent’s bike. With the Flash, you have built-in intelligence that has never been seen before on a bike. From the high resolution touchscreen to navigation to remote check-ins, this bike is as smart as some cars, and certainly smarter than your old commuter.

With Keyless Operation, you can use the touchscreen or connected application to disarm your bike or to turn it on.

The Trip Navigation is an application used like any other GPS Nav system. Just enter your destination and turn-by-turn navigation will guide you.

Finally, the Remote Check-In is done via the app to get real-time updates on your battery charge and security alerts. Check in on your bike at any time. 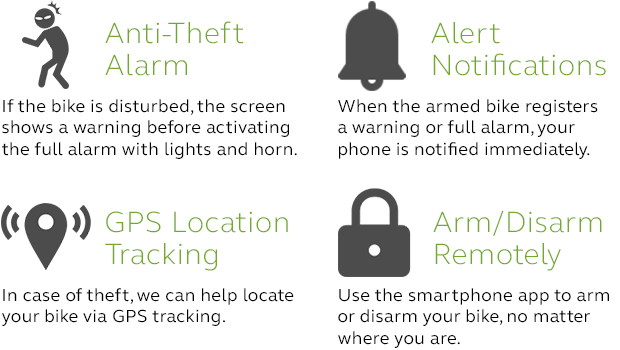 The Indiegogo Campaign Has Been a Huge Success

As I write this, there are 21 days left for the “Flash: The Bike Evolved” campaign on Indiegogo to collect their funds to make this eBike happen.

The great thing about this is the $100K is a flexible goal, which means that they will continue to use the funds to up the ante on their biking and investors/backers will receive more for their contribution.

While the initial Early Bird adopters have already taken all of the claims to the earliest investor options, it is still a great time to invest in the eBike by Flash — you can get 40% off of retail when the bike comes out, be among the first to receive it before it goes out to the rest of the world, and you can get more accessories for your support. Take a look below.

The Early Bird perk will give you the great savings above, plus you will get your Flash in January of 2018. For customers in Hawaii and Alaska, Flash will ship to you, but due to the shipping routes, there will be an additional charge of $350 / bike prior to shipping.

Items included in this perk:

Once the January perks run out (see Early Bird above), the next production run is available for this perk in March. You will receive your bike in March of 2018.

Items included in this perk:

Note: Flash is only able to ship within the United States — due to varying biking certifications, regulations, and wireless performance, Flash cannot ship internationally.