It is feasible that a road bike made of wood can result in “one of the world’s most aerodynamic bike frames” through aerodynamic frame building? 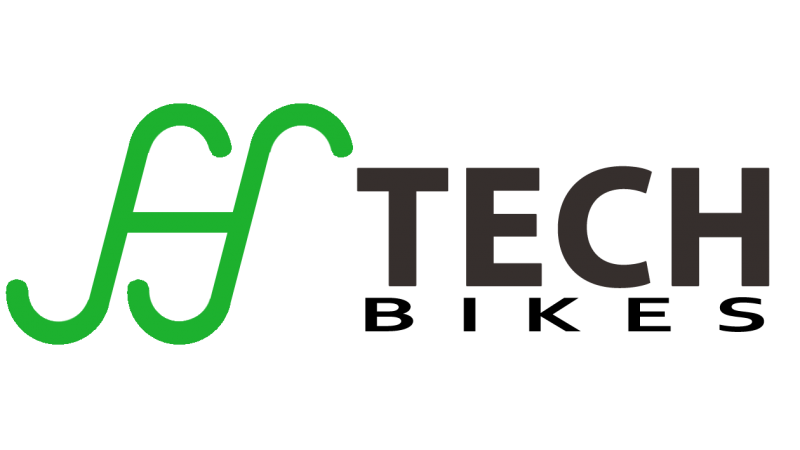 The innovative Australian company, HTech, sure thinks so. Their AerOne Concept bike took over a year of design work to accomplish — the Aussie wooden bike builders wanted to make an extremely aerodynamic road bike that could be used true-to-life by riders — except, rather than using the lighter carbon fiber material, they wanted their frame to be made of wood. And not just for aesthetic reasons, either.

Wanting to “take wooden bikes down off the wall and onto the road,” HTech actually designed their AerOne bike around UCI (Union Cycliste Internationale) frame regulations (so, yes, this is a completely legitimate road / racing cycle) complete with tube profiles and sizes that combine to form the best weight, stiffness, strength, and aerodynamics according to HTech.

Aero Drag is to Blame for Slowing Cyclists Down — Not Weight

The design of this wood frame aero bike is based on the belief by HTech, that it is aerodynamic drag (and not the weight of a bike) that is the single largest factor in the slowing of a cyclist. Despite using wood as their frame material, the aero design and focus on aerodynamic drag elimination were much of the priority with the AerOne.

The front of the fork dropouts on this model is actually designed to create a large bulge in order to remove turbulent air from the quick release, which causes drag. HTech s claimed that their CFD testing (aka: computational fluid dynamics testing) had shown that adding a rear-mounted caliper actually reduced overall frame drag by shielding the downtube.

The Decision to Use Wood for the Frame Material

It may seem insane for some people to imagine using wood as the frame material for a road or racing cycle — one remembers wood framed bikes as being something from the turn of the 20th century. Wood also brings to mind weakness and breakage — something that carbon fiber had been trying to eliminate from alloy frames in aero bikes and steel from regular road bikes.

However, this isn’t correct — the versatility of wood actually allowed HTech to create very complex frame geometries and shapes in a way that other metallic-based frames cannot. These geometries complement the frame’s appearance while providing a real, and very much needed, structural strength in order to make the frame as stiff as carbon — but without the road vibration. 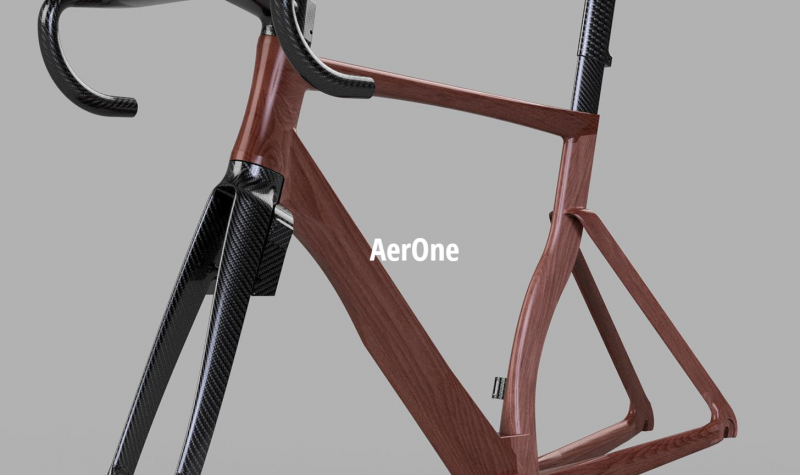 HTech can’t give us an exact weight yet for their full build (as their bikes are customized), but the AerOne Concept bike frame itself will weigh anywhere between 2 to 2.5 kg (4.4 to 5.5 lbs). This is more than double the weight of a regular, mid-range carbon version road bike — but it is impressive for a wooden frame.

Further, this weight is not of consequence to HTech, because remember — the core of their philosophy for the build of this AerOne Concept bike was that it is NOT the weight of a bike, but the aerodynamic drag, that is most significant in slowing cyclists down. By focusing on eliminating/decreasing aero drag and not putting so much emphasis on less and less weight, HTech may actually have unlocked a great bike in this wood framed AerOne.

The slightly heavier (but still pretty damn lightweight) frame will be able to retain the strength of the wood, the versatility of the geometry design, the stiffness, structural strength, and less vibration carrying through during your ride (as opposed to carbon bikes). The small price of 2 or so pounds in weight is actually an asset and a small price to pay for the positive structural gains in this wood frame bike. 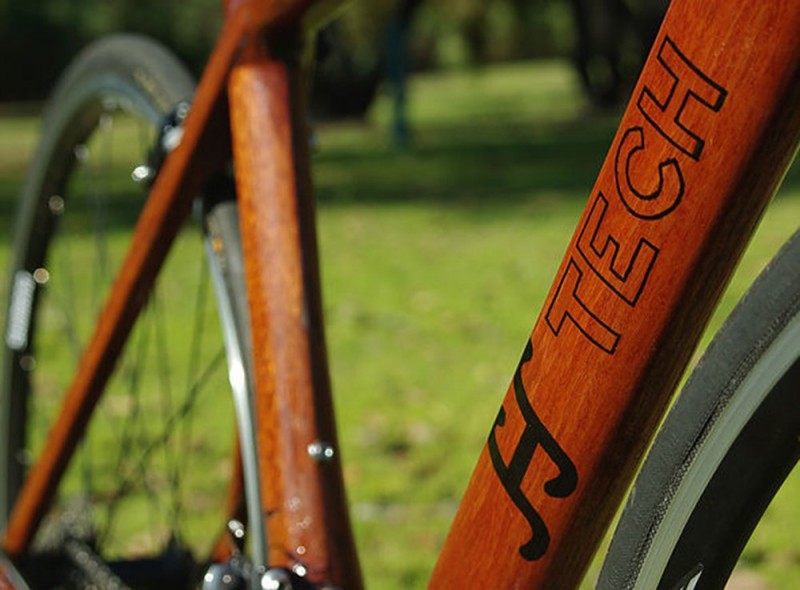 The aerodynamic, geometric design of this bike is what HTech believes (and has seen in their CFD testing) will make this AerOne Concept one of the best aerodynamic road bike frames in the world. And this claim is not despite the frame being crafted from wood, but because of it. Since this posting is a review of HTech’s release of their concept for this bike via the prototypes they have created and tested — there is obviously no price range available yet for the AerOne, as it is still in development.

What we do know is that HTech are looking to sell this model as a frameset (comprised of a frame, brakes, fork, seat post, and handlebars), or as a complete bike.

Due to the greater levels of customization, a different aerodynamic / geometric design, and other factors, the AeroOne frameset cost will likely be higher than the Aeriform.

The design of the AerOne is primarily a concept to show the possibilities of what can be accomplished with a wooden frame. HTech made one of the key design points making sure that everything on the bike can be fully manufactured. If there is enough interest (which we hope there will be), then HTech hopes that it would be fully possible that the AerOne could go into production soon.